The Zerofivers’ young starlet has been using his time at home to learn the piano - suffered a bitter loss to Augsburg on FIFA as well. 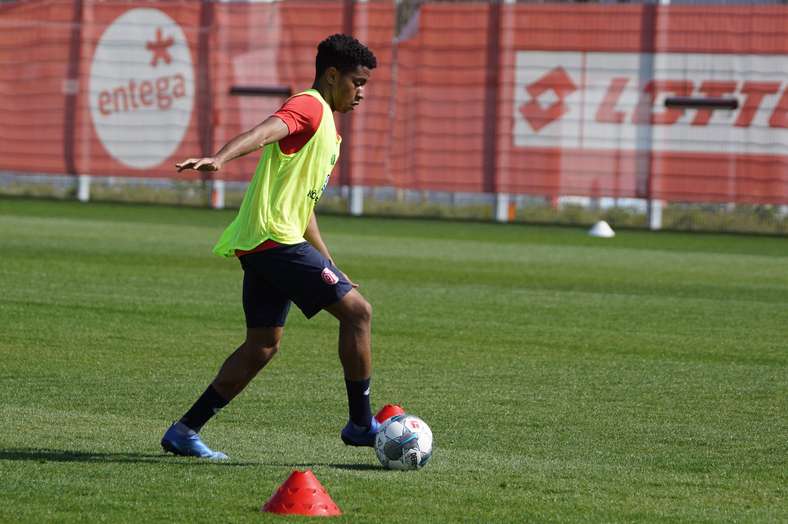 Barreiro and his teammates are back training on the Bruchweg.

The Zerofivers’ young starlet has been using his time at home to learn the piano - suffered a bitter loss to Augsburg on FIFA as well.

Leandro Barreiro has come to terms with the changing lifestyle during the Covid-19 crisis. The 20-year-old midfielder’s motto at the moment: accept the circumstances and make the best of it. "I hope that this experience will help me at some point, if I have to face new and unfamiliar situations as a footballer," he said.

Matchday was on Easter Sunday. Barreiro played for Zerofivers in the Bundesliga Home Challenge against FC Augsburg. It wasn’t a great experience for the Mainz e-sports team. Barreiro was on after his colleague lost 7-0 to his counterpart from Augsburg, but he couldn’t overturn the deficit. The midfielder played much better than FCA man Marco Richter, but lost 3-1. "I thought I was the better player, but I didn't take my chances. Richter really had the upper hand after he made it 2-1 with a goal Barreiro was less than happy about. It's called sweating in the FIFA world," the player explained afterwards.

Still, he definitely looked like he knew what he was doing on the console. Barreiro has played “every version since FIFA 07," back then on PlayStation 2. If you've played for a few years, you know the basics. If you play it a little more intensely, you can get really good at the game." Until November last year, he played a lot of Ultimate Team. "Then I realised that it wasn't enough with my team. If you lose a lot of games and concede weird goals, it can put you in a really bad mood. That didn't do me any good. That's why I’ve started playing a few easier game modes now," he says. As a footballer on the PlayStation you can use things from your daily training like tactics and spacial awareness. "And if it's fun, it can't hurt."

The fact that there was no family reunion this Easter is nothing new for the Mainz man. As a youth player, we always went on a tour during Easter. "But last year I was very lucky that I had time and was able to attend the family celebrations in Luxembourg. At home, everyone is invited round and there’s always so much food. Long story short, we eat a lot.”

Leo Barreiro has been living with a buddy in his Mainz apartment for a few weeks now. "I ate with him at Easter, and then phoned the whole family before and after." Other than that, the 20-year-old has plenty of club activities to be getting on with at home. "Right from the start, I tried to keep my sleeping pattern so as not to fall into a kind of holiday mode. I used the extra time a day to cook as much as possible by trying out recipes from a healthy cookbook. I’ve also started reading again, in addition to the daily running and strength program we have to do, and watching films or series in the evening. So the days have been going by really quickly.“

And Barreiro has also taken up a completely new hobby. "I started playing the piano." He already had a keyboard, there was an app for learning in the app store. Now I practice for at least an hour a day. "I always wanted to play an instrument. First I learned how to read notes and now I've gotten a little better. I don't know if I'm a musician per se, but I really enjoy it."

The players have been back training on the Bruchweg for a week now. "We get divided into groups of six in different dressing rooms. I think it’s being handled really well: we arrive in the training gear we received the day before and then all we have to do is put our boots on. All doors are open, so that nobody has to touch anything, there are enough disinfectant dispensers everywhere. We are organised in such a way that not everyone goes to every physio as usual, but we have a fixed physio who makes appointments with us via a private group," says the Luxembourg international. "On the pitch, we train in the groups that we were assigned in the dressing room. We always try to keep a safe distance from one another. There are no claps and things like that. Everywhere else has to be the same as us if we’re going to be eat this thing.”

The 20-year-old, who became a regular in the second half of the season, does not have to motivate himself. “We have the opportunity to work on things that we wouldn’t usually have the time for during a normal league season. We can’t change the overall situation, so we have to use the time to work on our games in other areas. "Of course, we’re all thinking about the league coming back at some point.“ There will be changes, we know that, so we’ll just have to try to deal with those as best we can.”