BARREIRO: "I NEVER GOT TIRED" 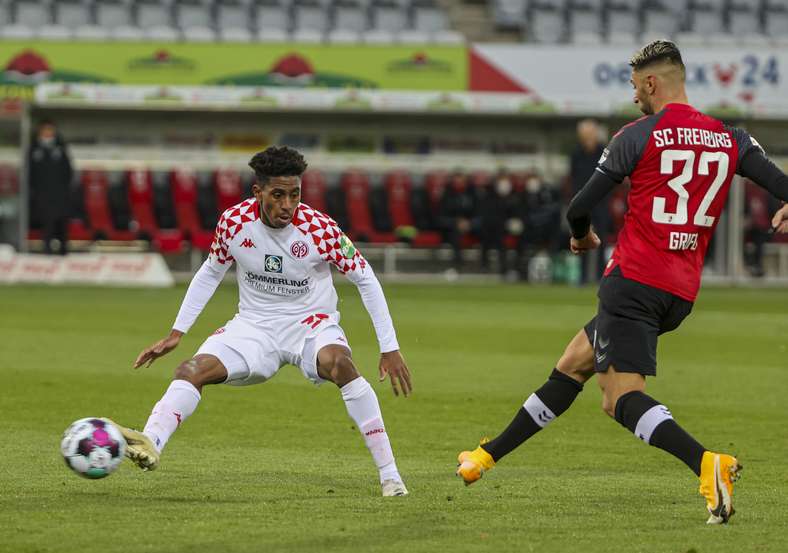 A player who has no problem attacking or defending: Leandro Barreiro feels comfortable in his role in the centre of midfield.

The Mainz players covered over 123 kilometres in their first win of the season in Freiburg, thus demonstrating their absolute determination to win the game. Leandro Barreiro is representative of all Mainz players who were not afraid to take on Freiburg. Our home-grown player from the youth team covered 13.17 kilometres in his 92 minutes of play on the pitch. A figure that impressed the strong-running 20-year-old himself: "Normally, when I run for 90 minutes, I run eleven to twelve kilometres. I noticed that it was more this time. But more important was that we won. That's why I felt good after the game, although I was exhausted," Barreiro said to the media on Wednesday.

The Zerofivers were the strongest running team in the Bundesliga at the weekend. Barreiro has no problem going down roads that hurt. Even in his childhood, the native Luxembourger enjoyed running a lot. "I never got tired," he said. "Later in the youth team, this was then worked on and improved more specifically. Now it's all about me being able to retrieve the ball regularly. Our athletics coaches also help me with this." Running strength is a characteristic that benefits him on his position in the centre of midfield, because he does not want to limit himself to filling gaps, getting into tackles and being a pure interceptor. "Some players are more focused on defence, others also do attacking runs, have more intense pressing. I can call on both qualities and I don't want to be tied down, I want to be flexible and use my strengths as they are needed," said Barreiro, who assisted JP Mateta's first goal.

An intense running game does not cost him any effort, because in the end it is all about helping the team and winning the game. "If that means that you still have to do the one sprint so that your opponent doesn't score a goal, then it goes without saying that you have to do it and give everything you have," said the Luxembourger, who was in the starting line-up for the draw against Schalke 04 after only playing over 25 minutes once in the first four games under head coach Jan-Moritz Lichte. "I'm satisfied with my performance in the last two games, that naturally gives me confidence," said Barreiro, who sees no advantage over his fellow players, who also play in central midfield. "Every training session is important. We are close to each other in terms of performance, so small things can decide it".

If this means that you still have to do the one sprint so that your opponent does not score a goal, then it goes without saying that you do it and give everything you have

The fact that Barreiro, who moved to the Mainz's academy at the age of 16, has gained the trust of the coach in this position despite strong competition, is also the result of a learning process that began in the 2018/19 season, when he was allowed to train with the first team for the first time as an U19 player, then got his first Bundesliga call-up and from then on became more and more established. "That has shown me a lot. If you work hard, you achieve your goals. It shows me that this is the right way. In addition, the fact that he was able to gain international experience early on in the Luxembourg senior national team and make his debut at the age of 18 proved to be helpful in being familiar with playing at a high level. "The international matches help me. The things I learn there do me good here and vice versa, of course."

Barreiro and his team-mates definitely did well to get the first three points. Now they have to keep up their performance in every training session until the next match on Sunday at 6 pm in the OPEL ARENA against Hoffenheim. Competition amongst the team is therefore something positive in principle, he emphasises: "You always have to step on the gas and not let up. Just like in the sprint in the last minute to prevent the opponent from scoring a goal. Because then exhaustion also feels good."