Back in competition mode

Preparations underway in the Bruchwegstadion ahead of next weekend's return - Beierlorzer: a huge challenge ahead 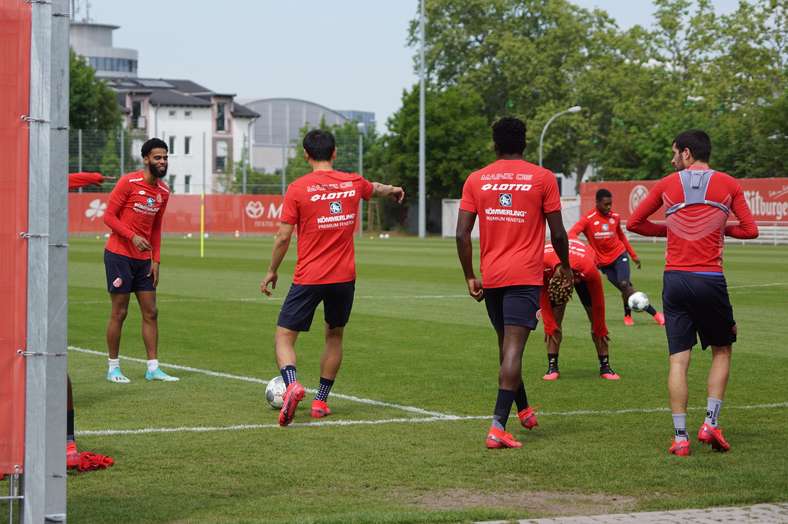 The Zerofivers will head into a week-long quarantine on Monday, as mandated by the DFL.

As of Wednesday, Mainz have returned to team training and are preparing for the Bundesliga season to get back underway. With just over a week to go, Achim Beierlorzer and his team are working to prepare for Sunday’s away game against 1. FC Köln on 17th May (15:30 CEST). “I’m convinced that the players will get back into the swing of things quickly,” said Beierlorzer. “We want to get off to a strong start in Köln, which is what we’re working towards.”

Beierlorzer would have preferred to have at least two weeks to prepare ahead of the season getting back underway. “Now, we have one and a half weeks to prepare,” the 52-year-old said. “Overall, every team is working within the same parameters. That’s important.”

In total, the coach will have nine training sessions to prepare his side for their first match in nearly two months. During this time, the team trained individually at home, before progressing to training in small groups at the Bruchweg over the last few weeks. “We, like many others, attempted to bring in some drills with stop-and-go movements, changes of direction and so on,” said Beierlorzer.

“I have to say that the players came through this long break well. They’re doing well, and they accepted the situation at hand. These past weeks we’ve upped the intensity in training a bit, without adding in challenges, but by adding in some intense running drills. We often staggered those sessions,” said Beierlorzer. From the head coach’s point of view, the recent break that lies between the team’s last match - a 1-1 home draw against Fortuna Düsseldorf - cannot be compared to the summer break. “The players didn’t have a break at all. There wasn’t a single week where they didn’t train,” he said.

However, Beierlorzer is quick to say that the upcoming weeks will still be a “huge challenge.” That includes the work done during team training, as well as the mental aspect of preparing for nine matches behind closed doors. “We have the Bruchwegstadion, where we will train and play inter-squad matches in order to simulate that atmosphere. The most important thing is that we bring the right mentality to the pitch, regardless of everything that’s happening around us. The players need to be focused on doing their jobs and playing football to the best of their abilities,” said Beierlorzer.

The team is simulating these competitive scenarios in every training session. “We’re recreating the feeling of facing an opponent with some 11 vs. 11, even if it is teammates against teammates. That’s the only way to test ourselves in that manner, to practice tactics, remaining compact and everything else involved. In terms of fitness, we’ve worked well of late. Now it’s about fine tuning the tactics, the timing of our challenges and our counter-attacks,” said Beierlorzer. The head coach added that the most important thing is to organise the training sessions so that every player in the squad is fit and healthy to feature next weekend.

As of Monday, the team will quarantine itself for a week, as mandated by the DFL. Mainz 05 will move into their usual team hotel, the Favourite, where they will implement their own hygienic measures. “Everything has been planned and thought out,” said Rouven Schröder. The measures cover everything from socially distanced team walks, to a seating plan in the dining hall and who will wait on each player. “We will continue to conduct checks on a regular basis,” Schröder said. The Zerofivers have undergone three rounds of coronavirus testing already. The tests will continue to be conducted as previously communicated. “So far, every test result has come back negative,” said Schröder.