AN UPWARD TREND THAT CAN BE DEVELOPED

The Zerofivers were neither satisfied nor dissatisfied after the draw against Hoffenheim, but they are still looking up. Quaison: "This game was another sign" 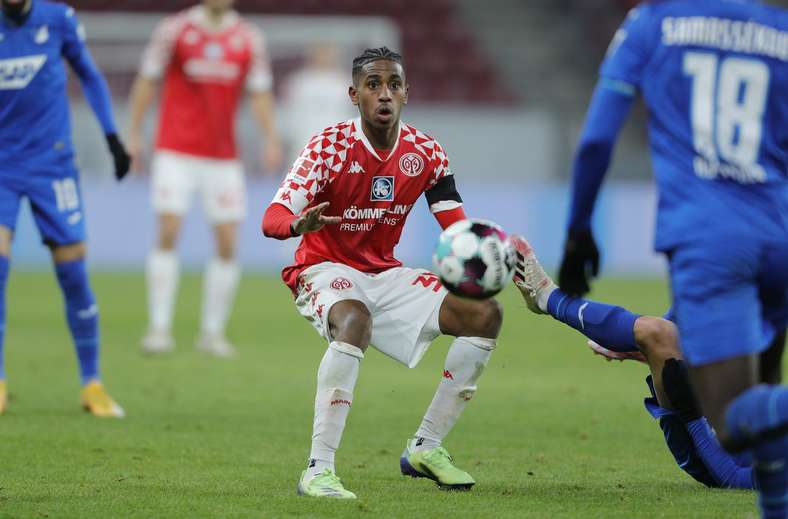 "We would have lost here a few months ago, I remember the game against Gladbach," said Leandro Barreiro on Sunday evening after the draw against Hoffenheim. He was reminded of the poor start to this season, however, the Zerofivers are now undefeated in three games. "There is a clear development to be seen, we are taking the point with us," he continued. The bottom line was that there were mixed feelings in the Mainz camp, because after the break, following Robin Quaison's well-made goal, there was more to be had than the one point.

"At the end of the day, we are not satisfied with one point because we had the slightly clearer chances," said the Mainz goalscorer in the post-match interview, but agreed with his team-mate Barreiro when he said: "The game was another sign that we are moving in the right direction. And indeed, the trend is going the right way after six defeats at the start. Not only in terms of points, but also in terms of performance and body language, the Zerofivers are now operating at a constant level from week to week in their twelfth successive season in the Bundesliga, successfully pursuing their long-term plan and not letting setbacks throw them off course. "After they equalised we saw a learning process, the team continued calmly and looking for that moment of luck", Rouven Schröder analysed. "We are on a good path. Nevertheless, we must remain focused. In Bielefeld, we can expect a lot from a direct competitor and we'll look to pick up three points," the sporting director already looking ahead to the coming weekend.

In the OPEL ARENA, the head coach also addressed the constantly improving performance of his team, but also looked for explanations as to why a lead, as against Stuttgart, Mönchengladbach or even Schalke, was not enough to keep the three points: "Perhaps we still look to defend our lead in these phases at the moment, instead of being active ourselves and looking for the winning goal," said Jan-Moritz Lichte at the press conference. But unlike in the past, the players did not allow themselves to lose focus after conceding, and Mainz, for their part, increasingly took control again, and could have taken the lead again with great chances from Jean-Philippe Mateta (post) and Jeremiah St. Juste (blocked). It is true that in the final phase, a large number of players were unable to score from set-piece situations (Lichte: "If we were to score a goal again sometime from a set-piece, we would be really happy"). However, the following statement, was regularly made by Mainz players themselves in the past in a modified form, "If you can't win, you must not lose. Full stop.

We know what to expect in Bielefeld

Mainz has not lost for three games and now has the big chance to break free against direct competitors from the bottom half of the table. After we travel to Arminia Bielefelde on Saturday (15.30 CET), exactly one week later FC Köln will visit the OPEL ARENA. Then Mainz will play Hertha and Werder Bremen in the last two Bundesliga matches of the year against other opponents on an equal footing. A lot to win, but also a lot to lose from the red and white's point of view. "It will be important that we not only believe in ourselves, but continue to work hard. We know what is in store for us in Bielefeld: physicality, a fast pace, commitment at its highest. This is exactly what we have to counter to win the game, while also using our own qualities".

It remains to be seen whether Mainz will rely on the recently established 5-4-1 system, which has been used in an extremely variable manner, or whether it will return to the back four due to the injury to Levin Öztunali, who is so impressive on the right wing. It also remains to be seen to what extent the head coach will include the 05 fans in his considerations during the press conference on Thursday morning. It is highly probable, however, that Barreiro will be in the game, who once again showed a committed performance against Hoffenheim, reeling off an equally strong 12.67 kilometres after he ran over 13 kilometres in Freiburg and embodies in the central midfield what Mainz defines itself by: unconditional, passionate commitment. Supplemented by quality play, Mainz wants to gradually increase their points total before the turn of the year.