AN IMPORTANT GOAL AND A DEBUT

Here's how the Mainz players fared for their national teams 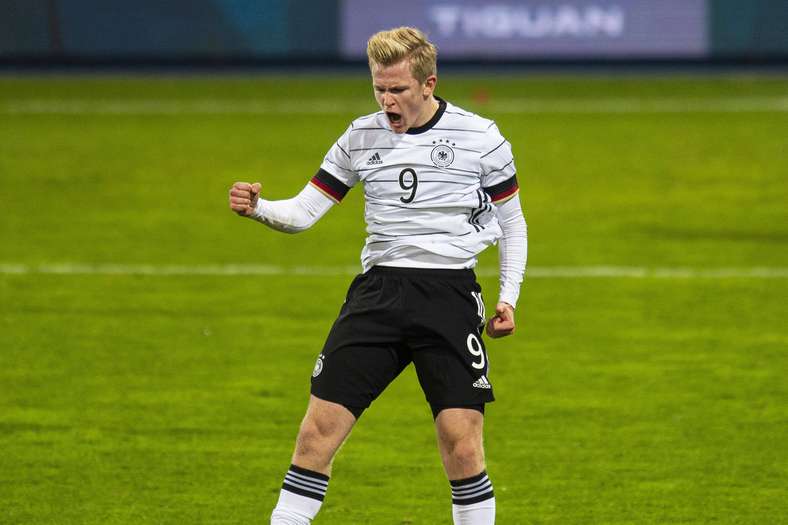 Jonny Burkardt celebrates his remarkable goal to make it 2-0 to the German U21s against Wales. Photo: imago-images/Noah Wedel

The international break is drawing to a close and the Mainz 05 players are gradually returning to the Bruchweg. The last 10 days have been particularly successful for Jonathan Burkardt and Finn Dahmen, who played a major role in helping the German U21 national team qualify for the European Championships.

The Zerofiver performances at a glance

Burkardt and Dahmen secured their participation in the European Championships next year with the German U21 team. The two home-grown players first played a half each in a friendly against Slovenia (1-1). Dahmen played a decisive role in the draw on his U21 debut, saving a penalty in the second half.

Germany U21s qualified first in the group with a 2-1 win over Wales. Mainz goalkeeper Dahmen was in net for the full game, Burkardt scored the important goal to make it 2-0 in the first half with a remarkable curling effort from the left corner of the penalty area.

With Leandro Barreiro from the first team as well as Florian Bohnert (U23) and Timothé Rupil (U19) from the youth teams, three Zerofivers were on the road for Luxembourg's national team. Barreiro was used in all three games (0-3 in the friendly against Austria. In the Nations League they lost 1-2 against Cyprus and drew 0-0 against Azerbaijan) from the very beginning, Bohnert was substituted twice, Rupil didn't play any minutes.

Barreiro also faced Karim Onisiwo, who will play another game in the Nations League against Norway for the Austrian national team tonight (20:45 CET). Onisiwo played briefly against Luxembourg in a friendly, but remained on the bench for the 2-1 victory over Northern Ireland.

Robin Quaison played in two of Sweden's three games. In the 2-0 friendly against Denmark the Mainz attacker was in the starting eleven. In the 4-2 defeat to France in the Nations League, substitute Quaison scored his eighth goal for Sweden. He watched the 2-1 victory over Croatia from the bench.

Edimilson Fernandes played twice for Switzerland, first in a friendly against Belgium (2-1), then in the Nations League in a 1-1 draw with Spain. The Swiss team's other Nations League match against Ukraine was cancelled.

In a dramatic game against Iceland (2-1) Ádám Szalai qualified with the Hungarian national team for the European Championships next year. The Hungary captain injured himself in the game and returned to Mainz early.

Kunde Malong helped Cameroon beat Mozambique in the Africa Cup of Nations qualifiers. In the 2-0 victory in the first leg, the Mainz midfielder was on the pitch for the full 90 minutes, in the second game (4-2) Kunde came off the bench after 65 minutes.