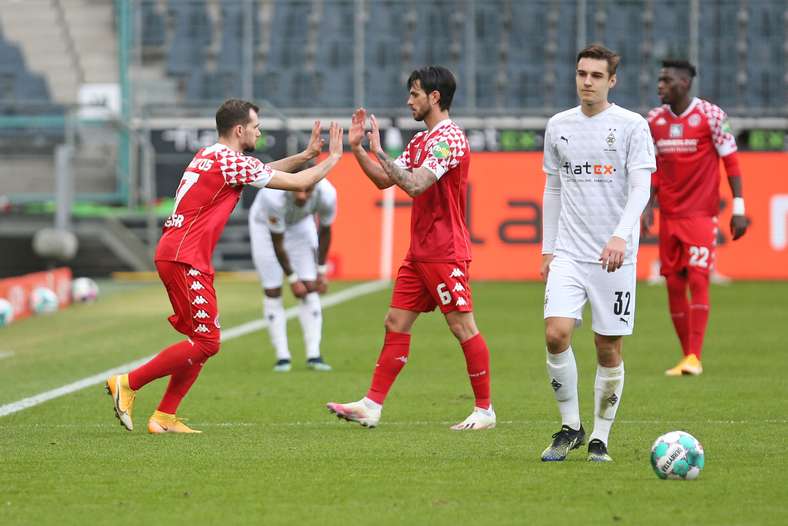 Impetus from the bench: The substitutes (here Kevin Stöger, who later scored the winning goal in Mönchengladbach) bring a lot of momentum onto the pitch for Mainz.

Mainz 05 is still in the middle of a relegation battle, but has already gained something. "Confidence", as Christian Heidel, board member for strategy, sport and communication, put it, or in other words, belief in their own strength. Traditional 05 virtues, this unconditional rebellion against opposition and fighting to the last second, has broken through again and is reflected week after week - in a close-knit unit on the pitch and also in the results.

Examples of the development under the new sporting leadership around Heidel, sporting director Martin Schmidt and head coach Bo Svensson are the games of the second half of the season so far, in which the Zerofivers earned ten points against opponents from the upper half of the table. Even if there is still a lot of room for improvement "in terms of football, in terms of content", as Svensson noted, the Rheinhessen side are no longer as easily thrown off course as they were a few months ago, but remain passionate, willing, courageous and radiate confidence. And they get confirmation for this in the form of a sense of achievement.

Late goals are a new quality

Like against Leipzig, when they came back from two goals down against one of the league's top teams to win at home for the first time, against Union Berlin, when the Zerofivers held on to their lead, or with the late goals that led to one and three points against Bayer Leverkusen and Borussia Mönchengladbach. Goals in the final quarter of an hour are also the keyword, because compared to the first half of the season, Mainz no longer concede goals in this period, but score them and can always add to their tally in the final phase of a game. In addition to players like Robin Zentner and Moussa Niakhaté, many other Rheinhessen players are now leading the way. For example, Ádám Szalai up front, newcomers Dominik Kohr and Danny da Costa, or Stefan Bell, who is defending in the centre of defence again as if he had never been away. The list could go on.

The path that Svensson and his coaching team want to take with their team is reflected in clear playing principles, passion, morale and team unity, without which a successful relegation battle would be almost impossible to manage. The substitutes have also been instrumental in the recent successes, not only bringing a lot of momentum to the pitch, but also intervening in a way that decided the game. Kevin Stöger scored important goals as a substitute in Leverkusen and at Borussia, newcomer Robert Glatzel started Mainz's comeback at Bayer 04 with his goal. And the other substitutes were also praised by the head coach. "The players who came off the bench had a positive influence on the game," said the head coach after the Gladbach game, and centre-back Bell also said in an interview with 05ER.tv: "It's outstanding how the players who came on as substitutes work directly and always raise the level again in the last games. That is very precious," said the centre-back.

I think we need to be even more focused in defence

With the training week that started on Tuesday, the focus is now on the next opponent. On Sunday (3:30pm CET), FC Augsburg, an extremely unpleasant team to play against, will come to the OPEL ARENA in Mainz, where the Red and Whites must once again call upon all the virtues of the past weeks. "We have to be more uncompromising in the duels, recognise the danger earlier and stop it accordingly. I think we have to be even more focused in our defending," goalkeeper Zentner said, making it clear that the Zerofivers are ready to step up their game - in terms of performance and in the way they display it on the pitch.