Adding "a dash of colour" to Saturday's match

Beierlorzer is quietly confident for this weekend's match against Dortmund. 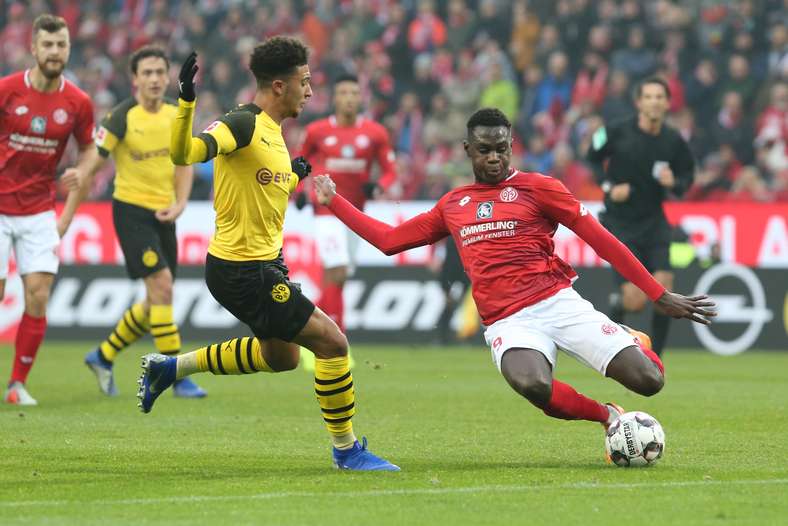 Mainz take on Borussia Dortmund in a must-win clash on Saturday.

According to Rouven Schröder, the Mainz players should provide an absolute highlight and a “dash of colour” in the OPEL ARENA on Saturday. Today, the head coach and the sporting director attended the matchday press conference two days before kick-off, both of whom were wearing a bright red heart pinned to their dark jumpers. Saturday’s clash with Borussia Dortmund is this year’s “Game of Hearts”, in which the club traditionally collects donations for those in need. Three points for the team would also be gratefully accepted.

In recent years, the wooden huts of the Christmas village around the arena have sold plastic hearts, this year, however, the pins are made out of wood. Given that the game is virtually sold out, the perfect conditions are there for a great match against a club, which has just qualified for the Champions League round of 16.

Giving it their all

“We’ll need to have a really good day in order to beat Dortmund”, said Achim Beierlorzer for a sporting point of view. “But I think that the games against Hoffenheim and Frankfurt show that we are in a position to cause an upset, if we give it our all.” The coach and the players followed Dortmund’s 2-1 win over Slavia Prague in midweek. “That game showed just what Dortmund are capable of”, explained Beierlorzer, who quoted BVB’s Germany international Julian Brandt, who had said “we really can hustle teams”. The Zerofivers’ boss said that you could see just that during the game. “Get it forward, interplay, passing, penetration. Their 3-4-3 is so flexible. It will be a huge challenge for us. We have to be switched on, stay alert to their penetration. But we mustn’t be shut out ourselves”, said Beierlorzer.

“if we play with intensity and aggression in midfield, if can win the ball high up the pitch, then we also want to show our own game. Against Hoffenheim and Frankfurt, we showed that it is possible. If we run hard, if we are ready to get forward quickly and play bravely, then we can be really dangerous and can score goals. If we don’t and we just turn up as a sparring partner, it’ll be difficult. We have been through that before, and we want to avoid it.”

After the 2-1 defeat in Augsburg, the team needs to get back to “the things that have made us successful.” Beierlorzer was naturally looking for Dortmund’s weaknesses during their game against Slavia Prague. Numerous attacking options and midfielders that always look to get the ball up the pitch bring a chance for Mainz to exploit the gaps left in behind. “Balls played in behind the midfield to players running at the back line aren’t so easy to defend. Slavia caused them problems by doing this”, the Mainz head coach explained. Beierlorzer was quick to add that “it was a Champions League game. But we also have a lot of pace in attack and can counter quickly.”

Mainz’ encounter with Dortmund signals the beginning of the end of the Hinrunde. The Zerofivers will only have a quick turnaround before travelling to Bremen, before taking on Bayer Leverkusen in the final home game of 2019. Rouven Schröder said that he was a big fan of these two-game weeks. “Not because I don’t like being at home, but because we get three cracking games in the space of seven days. It is great to be able to mix it up with clubs like these. We have three massively important games left, into which you can pour everything before Christmas”, said the Mainz sporting director.

Ridle Baku “is giving us an extra option”, Beierlorzer said. The young midfielder has served a two-match ban and is available for selection. Karim Onisiwo and Robin Quaison, who both picked up knocks against Augsburg, trained this week and are fit and ready to don the red-and-white for a clash with the black-and-yellows.