A win for our self-confidence

Quaison returns to haunt the capital city as Schröder heaps the praise on Bruma and Barreiro. 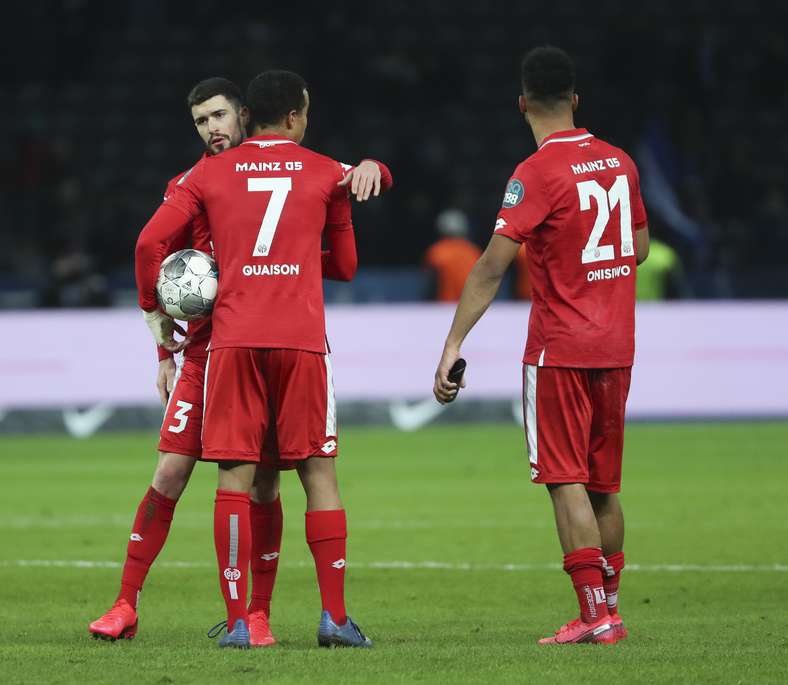 In an all-round impressive team display, one man stood out above the rest: Robin Quaison scored all three of Mainz’s goals in their 3-1 win away to Hertha on Saturday, recording his second hat-trick of the season after the 5-0 win in Bremen before Christmas. Achim Beierlorzer made clear, however, that he was happy with all of his players, including Jeffrey Bruma, the unfortunate scorer of an own goal. The sporting director also offered some additional praise for the youngsters in the team.

For the second time this season, the matchball was going home with Robin Quaison. The Swedish forward hid the ball under his jersey after the full-time whistle before burying it in his warm coat. Eventually, it will take its place right alongside the matchball from Werder Bremen away in Robin Quaison’s house. Back then, the 26-year-old scored his first professional hat-trick. Now, he has another one for the collection from Berlin’s Olympiastadion, where, almost exactly two years ago, he decided a game of equal importance, scoring twice in a 2-0 win. Clearly, Robin Quaison enjoys playing against the capital city blues, having also scored the first goal of a 2-1 win in the reverse fixture this season.

After 17 minutes, Levin Öztunali set up Quaison for his first of the day – a goal quite typical for him; "Not belted in," as Rouven Schröder put it, but accurately slotted into an open space which he created for himself with a little shimmy. "I was still angry with myself at half time though," revealed Quaison. The two missed opportunities right after his opener were eating away at his conscience. "I should have been more concentrated," he said, self-critically.

In the end, the Swedish talisman had a "good day for us" to look back on, thanks to his sharp perception and an outstanding bit of football from Karim Onisiwo. "For me, that was the goal of the day," said the sporting director. Onisiwo took down a throw-in from Ridle Baku, beat his man on the by-line and cut the ball across goal, where Quaison was arriving to grab his second of the afternoon and make it 2-0. "Robin was actually still tying his shoe just outside the box, not involved in the attack at all. Then he anticipates what’s coming and steps up to deliver," described the sporting director. To make it 3-1 in the closing stages, Robin Quaison confidently stuck away a penalty, won by Onisiwo. He "could not afford to miss," said the scorer. After all, Mainz are currently on a record breaking run of penalties scored in the Bundesliga. Robin Quaison’s was the 26th consecutive successful penalty for the Zerofivers.

"Wrong place at the wrong time"

After the second Mainz goal had seemingly settled the result, things quickly got interesting again as Jeffrey Bruma saw a header from Dedryck Boyata jump off his chest and into his goal (84’). An unfortunate moment for the debutant, who otherwise enjoyed a successful first outing in Mainz colours as the centre of a back three. "We saw that he played exactly how he’s used to playing. He was always there putting out fires for his team and continuously put his body on the line," said Schröder. "It’s important to have this kind of debut," said the Mainz head coach. Bruma gave the defence stability and kept Hertha’s expensive winter signing Krzysztof Piątek quiet for the majority of the game. The Poland international from AC Milan did not enjoy any real sight at goal, not even as a result of the many corners his team had. "We’ve worked on set-pieces and in Bruma we’ve got another player who’s strong in the air, even though he was just in the wrong place at the wrong time for the own goal," said Beierlorzer.

"It was a very important win. We needed that for our self-confidence," said Quaison. There was no lack of self-confidence among the youngsters in the starting XI, however. Leandro Barreiro showed Berlin the same strengths he’d shown against Bayern the week before. The 20-year-old from the academy put in a performance Schröder believes to be symbolical: "He stands for everything that we want to see: hard work, always closing down the gaps, aggressively following up loose balls, defending from the front and showing passion for the team. He did exactly that and he tirelessly continued to do so. Good for him!" Rouven Schröder said he had no problem heaping praise on the young Luxembourg international, "because we know that he won’t lose his head in the sky. Leo is a very sensible person."