After missing the start to the season, Edimilson Fernandes has fought his way back into the Mainz team. He wants to become more efficient and make up ground with his Mainz team: "We are going on the pitch as one team". 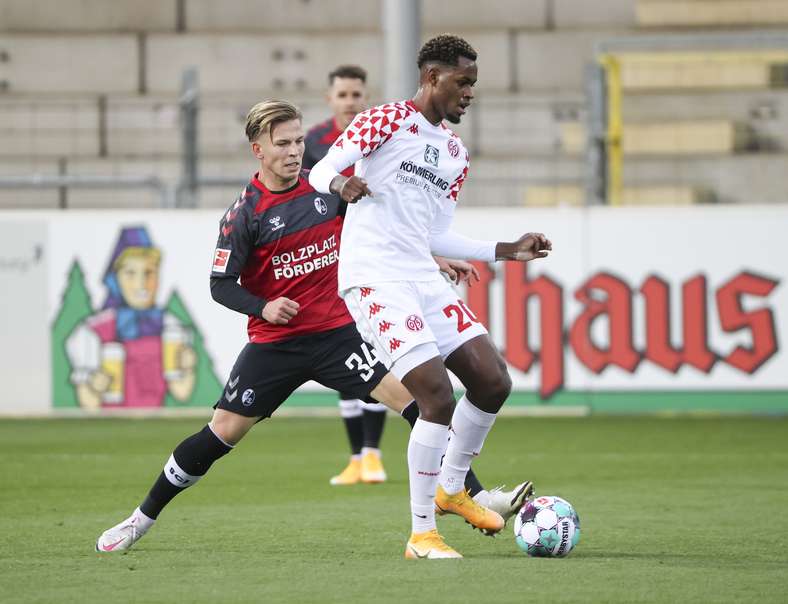 Edimilson Fernandes has started the last two Bundesliga games against Schalke (2-2) and most recently in Freiburg (3-1). His presence alone is not enough to explain the upward trend of the team, but he can still become an important factor in the race to catch up after a poor start to the season, which the Swiss national team player initially experienced only as an observer due to coronavirus.

The start of the second half against Schalke 04 was experienced by "Edi", as he is called at the Bruchweg, as a left-sided defender in a 5-4-1 system, which Jan-Moritz Lichte had switched to after 30 minutes. It was his third position that day. The 24-year-old had started the game as a classic ten and then switched to the right-back position for the first 45 minutes. The head coach knows about the versatility of the player, who reliably completed the tasks set to him. Two weeks later, he finally started alongside Leandro Barreiro in defensive midfield. Once again Edimilson put in a decent performance and had no problems adapting: "I've regularly played in different positions in the past, I try to bring my strengths to play everywhere and want to be an asset to the team - wherever I play," he says modestly.

He is happy to be back on the pitch and to be part of the improved results. But satisfaction does not creep in. What is important now? "We have to stay focused in order to follow on from Freiburg and win the match against Hoffenheim. We have to learn to keep on working hard after a win, to recall our performance, because otherwise the victory was worth nothing," the player emphasises, also with a view to the past, what is important now. "That is our task, because we have put ourselves in the situation of urgently needing to earn more points. A task that the coach also emphasised at the beginning of the week: Namely to stay clear in one's head, not to let up one percent and to approach the upcoming task with the same focus.

Of course, for me the season started with a delay

While Mainz's start to the season had already gone down the drain on the first few Matchdays, Edimilson had been condemned to watch, as is well known. Coronavirus and weeks of positive test results forced him to watch, training was out of the question. His first game back was as a sub against Bayer Leverkusen (0-1). "Of course it was hard in the summer to be out for four or five weeks at a very important stage of preparation and beyond," says Edimilson looking back. Although the infection was mild, it was still necessary to do some follow-up work afterwards. "The season really started for me with a delay. But now I'm here and I want to help the team make up ground.

The 1.90m tall midfielder has the ability to be dynamic, make smooth movements on the field, has a remarkable physique and a good shot. It's the latter point that the Swiss player, when asked about his personal goals, comes into play. After all, the yield of this one important goal (to maintain his class against Werder Bremen in June), in 29 games in a Mainz shirt, is far from satisfying the player. He would like to become more efficient: "I want to score one or two goals, create more chances. I would like to develop and strengthen this awareness of my attacking quality further and be higher up with Mainz 05 at the end of the season than I am at the moment. That must be our common goal". An assessment that, by the way, is shared by his coach: "Edi brings everything with him to help us in the most diverse positions. He is incredibly versatile, but has potential to develop further. He must become even more actively involved and step by step reach the point where he can fully exploit his potential," said Jan-Moritz Lichte at the press conference prior to the match with Hoffenheim. The goal against Bremen is a good example of what is expected of him even more often, he said.

Edimilson recently gained additional self-confidence with the Swiss national team, which was on the verge of defeat for Spain in a 1-1 draw in the Nations League. Edimilson was allowed to play 90 minutes and compete with world-class opponents. "We knew how to give our all and keep our soul on the pitch," he proudly explains. A sentence he would like to use as regularly as possible in the future, also with his club team.

...to be immediately ready and aggressive, you can prepare yourself for this

The performance in Freiburg - with 123 kilometres run, was further than any team in the league on this Matchday - can be taken as a benchmark, as even the players find. "We go on the pitch as a committed unit, in which everyone runs for each other. If one is down, the next is there to iron out a mistake. I think that is what makes us, must make us. Cohesion and the willingness to help each other, in my view, are basic requirements that we, as Mainz 05, must always bring to the pitch. The Mainz team will have the opportunity to recall these requirements on Sunday evening from 6pm in the OPEL ARENA. Although the final details of the match plan against Hoffenhheim are still being fine-tuned behind the scenes, Edimilson is already revealing the plan in terms of attitude: "We have to show from the very first second that we are there, that we are venomous, that we want to push and win the match in our stadium. You can't plan an early goal like in Freiburg, you can't plan to be immediately ready and aggressive, you can prepare for that". It should undoubtedly be a suitable prerequisite for a similarly stormy early phase as recently in Breisgau.