A strong performance, but no points to show for it - Mainz lose against Hoffenheim

Mainz lost 1-0 at home against TSG Hoffenheim despite dominating the game for long stretches and were unlucky to concede. 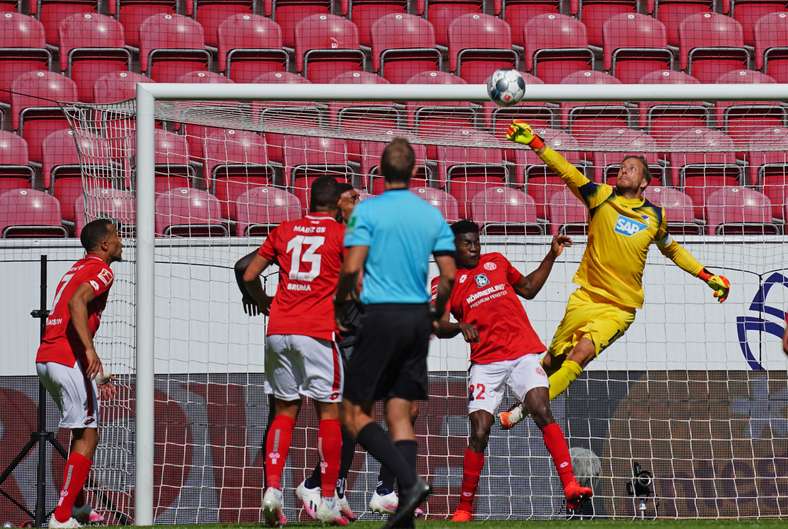 Mainz had many chances but couldn't take full advantage of them in their loss.

It should not have ended the way it did – Despite dominating the proceedings for most of the match, the Zerofivers were unable to score and lost against TSG Hoffenheim 1-0 at the OPEL ARENA, leaving them without a win since the Bundesliga restart. Ihlas Bebou, who had come on as a first half substitute for the injured Bruun Larsen, poked the ball in shortly before the break after a Hoffenheim counter-attack. Florian Müller had saved a penalty previously after Alex Hack had crunched Steven Zuber in the Mainz box, and the closest Mainz came to scoring was when Robin Quaison’s free-kick bounced wide off the inside of the near post. Even a similarly committed performance in the second half was unable to prevent Mainz from losing their second game at home in six days.

At the end of the double gameweek, Achim Beierlorzer decided on just the one change from the side that drew 1-1 with Union Berlin on Wednesday, bringing in Edimilson Fernandes for Kunde Malong in midfield. The Swiss took the Cameroonian’s defensive midfield position alongside Leandro Barreiro. Apart from that, the side lined up as it had in Berlin, in a 4-2-3-1 where Moussa Niakhaté again took the left-back position.

While the guests had beaten Cologne in their midweek fixture 3-1, the hosts were still chasing their first win in an increasingly tight relegation battle. The first test came only seven minutes in, when Robert Skov opened fire from long-distance, but his shot was saved by Müller with an outstretched palm. Around three minutes later the Zerofivers’ Nigerian striker Taiwo Awoniyi had his first chance of the afternoon, but Oliver Baumann was equal to it.

In a heated start to the match, Ridle Baku picked up a yellow card that ruled him out of next week’s Rhein-Main-Derby against Frankfurt. Referee Sascha Stegemann handed out two cautions to both teams within the opening 20 minutes. The first big chance went Mainz‘ way, as Jean-Philippe Mateta crossed to Quaison, whose deflected effort fell to Baumann. Instead of pressing the advantage, Mainz switched off and didn’t pick up the run of Christoph Baumgartner, who surged into the box before being felled by Alexander Hack and Ridle Baku, whereupon the referee pointed to the spot and awarded a penalty. Zuber set the ball down, and picked the left corner, but Müller was equal to it and produced a magnificent save (27’)

The goalkeeper’s save gave Mainz the momentum, and after a strong 15 minutes, Robin Quaison had a free-kick from the edge of the box, which the Swede hammered against the inside of the near post, but the ball bounced wide of the goal. Mainz threw everything at Baumann’s goal, but nothing seemed to go in. A corner came to Awoniyi who was unmarked in the box, but he stood on the ball and was unable to score. Having weathered the storm, Hoffenheim were able to hit back, and they scored a counter-attacking goal shortly before the half-time whistle (42’). Bebou ran with the ball at the Zerofiver goal, Baku and Hack were unable to make the tackle, and Müller couldn’t make the save as Bebou fired past the onrushing German to make it 1-0 to the visitors. Thus, despite a totally controlling performance in the first half, Mainz’ momentary lapse condemned them into going into the break 1-0 down.

Three substitutes at half-time, many chances but no more goals.

When the second half began, Achim Beierlorzer made three changes. Karim Onisiwo, Levin Öztunali and Daniel Brosinski replaced Boëtius, Hack and Mateta. The first chance fell to the visitors, but Munas Dabbur’s effort was well saved by Müller (50’) Mainz seemed to have recovered from conceding, and Öztunali set up Fernandes, who fired high over the crossbar.  An hour in, it looked like Mainz had equalised through Awoniyi, but the referee indicated that it appeared that Onisiwo had fouled Baumann, so the goal was ruled out in a bizarre scene.

Hoffenheim gave it their all to protect the result, and prevented FSV from scoring what would've been a much-deserved goal. Awoniyi clashed with Baumann in the box, but no penalty was given (68'). TSG could've wrapped it up early too. Stefan Posch's long ball forward hit Maximilian Beier in stride, but Müller was equal to it -0 a brilliant piece of goalkeeping again from the German (75'). The hosts continued to struggle up to, so Beierlorzer brought on ex-Hoffenheim striker Ádám Szalai to add some much needed power to a lethargic offence. Five minutes before the end, Brosinski had a go from distance, but again Baumann was there, much to Mainz's frustration. Mainz just created far too few chances, but they could have equalised late on though Baku, whose shot from around 16 metres out was dragged wide (90'+2). Even Müller looked to get Mainz level before the end of the 90 minutes. The 'keeper went up for two corners towards the end, both of which resulted in nothing for FSV. Hoffenheim ran out 1-0 winners in a fiercely contested encounter. Wins for Frankfurt and Bremen mean the relegation battle is poised on a knife edge ahead of the Rhine-Main Derby next Saturday.