A record-breaking season for the Zerofivers

Remembering the 2010/11 campaign, the best in the club's history. 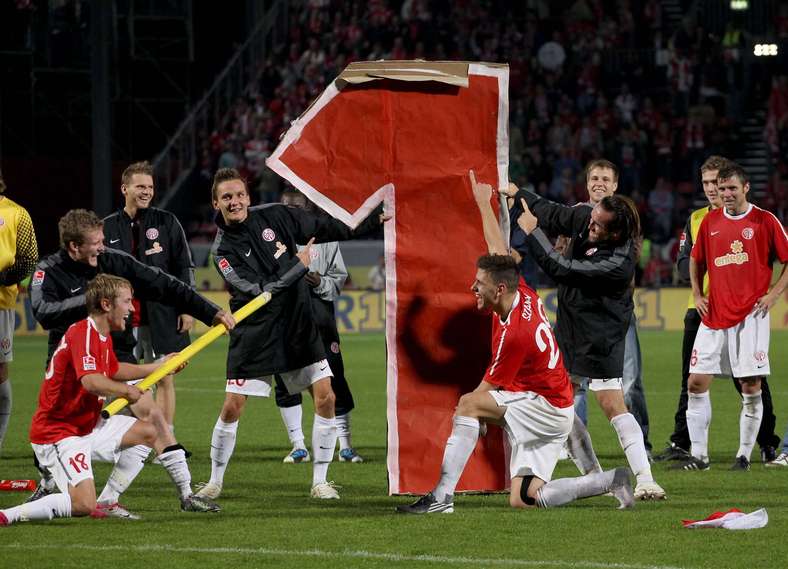 Leaving Bruchweg with Europa League football: a fitting end for a wonderful home.

Mainz are staying at home. So we have a bit of time to take you through some of the most important events in our club’s history. Today, we’re looking at the 2010/11 season and FSV’s best ever campaign in the top flight of German football. It was a season, in which Thomas Tuchel’s side achieved a sensational fifth-place finish and secured direct qualification for European football for the first time in the club’s history.

A total of 58 points. The Zerofivers have only ever achieved a higher total in the second tier.

“I think we’ve brought a great group together,” said Christian Heidel. But there was a high-profile departure just days before the start of the season. Aristide Bancé, Mainz’ goal threat up front, followed the call of the money and switched the Rhein for the desert metropolis of Dubai. Ádám Szalai, the recent signing from Real Madrid Castilla, and Sami Allagui, who joined the club from Greuther Fürth, would have to pick up the slack in front of goal.They would join a potent attacking force, which included Andreas Ivanschitz and Mainz academy graduate, André Schürrle. Marcel Risse (Leverkusen) and Lewis Holtby (Schalke) provided further depth. In defence, the Zerofivers were reinforced by Christian Fuchs, who was brought in from Bochum, and Marco Caligiuri from Fürth.

And the much-strengthened Mainz squad started well: 2-0 against Stuttgart, 4-3 in Wolfsburg, 2-1 against Kaiserslautern, 2-0 in Bremen, 2-0 against FC Köln, 2-1 away at Bayern Munich and 4-2 against Hoffenheim. A club record start to a Bundesliga campaign. Seven wins, 21 points, top of the league. All of a sudden, journalists and TV cameras were ever present at training sessions at Bruchweg. The Zerofivers were the such of global discussion, and the eyes of the football world were suddenly fixed on Mainz.

“The weeks of festivities at the theatre of dreams have reached a climax before it was due. The latest production of a fairy tale, about which an entire country is pondering its continuation and outcome, that has brough a sense of collective ecstasy to a city. In its last season, the time-honoured Bruchweg stadium is undergoing its final transformation into a cult site of a grand epoch. The stage, on which a fantastic ensemble cast celebrates a success story that is almost too beautiful to even comprehend,” the Rhein-Zeitung wrote with glee, swept of by the magic of a dream start.

Tuchel had seamlessly continued on from the philosophies of the previous campaign. His team continued to put the hammer down, driven on by a willingness to fight and great passion. The Mainz players pushed themselves to their absolute limit, threw themselves into tackles and even maintained a swashbuckling style of possession football. They were well organised at the back and played combination football that was tactically sound and optimally prepared for any opponent. The team displayed a great togetherness, strengthened further by the unreal moments only football can give you, such as the 4-3 away win in Wolfsburg. Heads were high and confidence was brimming throughout the squad.

It was a star-studded Wolfsburg team, including top quality players like Edin Dzeko and Mario Mandzukic, and Mainz 05 found themselves 3-0 down after half an hour. A lifeline was given to them before halftime thanks to a Morten Rasmussen goal. The Zerofivers searched for the strength to fight back in the second half, and fight back they did. Goals from Elkin Soto, Schürrle and Szalai turned the game completely on its head and saw the men in red take a brilliant three points back to Mainz. Then there was that famous day in September in Munich, and Mainz’ first ever win against the great FC Bayern.

Those 90 minutes in a packed Allianz Arena treated us to a breathless end-to-end affair, masterminded by two tactical geniuses in Thomas Tuchel and Louis van Gaal. In the end, the guests’ passion and drive saw them win the day and take all three points in the Bavarian capital. Mainz defended from the front and were clinical in front of goal. Allagui’s backheel put FSV in front, before a comical Bo Svensson own goal levelled the score. It was Szalai, who had the final say, turning and firing home to give Mainz victory against the most mighty of opposition. “It was a tactical masterclass from Mainz,” praised Karl-Heinz Rummenigge.

Mainz had never won their first eight games in a season, and the Zerofivers narrowly missed out on the chance to make history. Hamburger SV ended FSV’s run, beating the men in re by one goal to nil at Bruchweg. But Mainz bounced back quickly, winning in Leverksuen thanks to a late winner from Ivanschitz. “Either a good substitution, or wrongly starting on the bench,” Tuchel said afterwards in his usual casual manner.

With 33 points in the bank, Mainz suffered several setbacks and some players suffer a dip in form. During the winter break, the Zerofivers headed to a training camp in Barcelona. The idea being to recharge body and soul, and take direct inspiration from Pep Guardiola’s Barça.

After two defeats to start the Rückrunde, Holtby grabbed the only goal in a tense derby match against FC Kaiserslautern. But the second half of the season would continue to bring both highs and lows to Mainz 05. Away wins in Hoffenheim and Hamburg and a draw against league leaders Dortmund provided the high points, but these would often be followed by severe dips in form. Even so, the team pulled ahead of FC Nürnberg in the fight for Europa League qualification. Two vital wins, 3-0 against Eintracht Frankfurt and 3-1 against Champions League semi-finalists Schalke, delivered Mainz direct qualification for Europe for the first time in the club’s history. “The reception was worthy of champions. Mainz were welcomed home with flares, fireworks and songs,” it read in the Rhein-Zeitung. 1,500 fans took to the streets to welcome the team home from the success in Gelsenkirchen.

A record-breaking season ended with a 2-1 win against FC Pauli. It was a season that was never expected at Bruchweg, and a fitting way to say an emotional goodbye to that beloved stadium. But as the Rhein-Zeitung wrote, it was also “a departure for new horizons.” Since the 2011/12 season, the Zerofivers have called the new Arena their home, but Bruchweg still remains an integral part of the club as the training centre and academy of 1. FSV Mainz 05.