A QUESTION OF APPROACH

Head coach Bo Svensson not only wants to look at the opponent's strengths before the clash with BVB, but also find solutions to hurt them - question marks behind St. Juste, must defend Haaland as a team 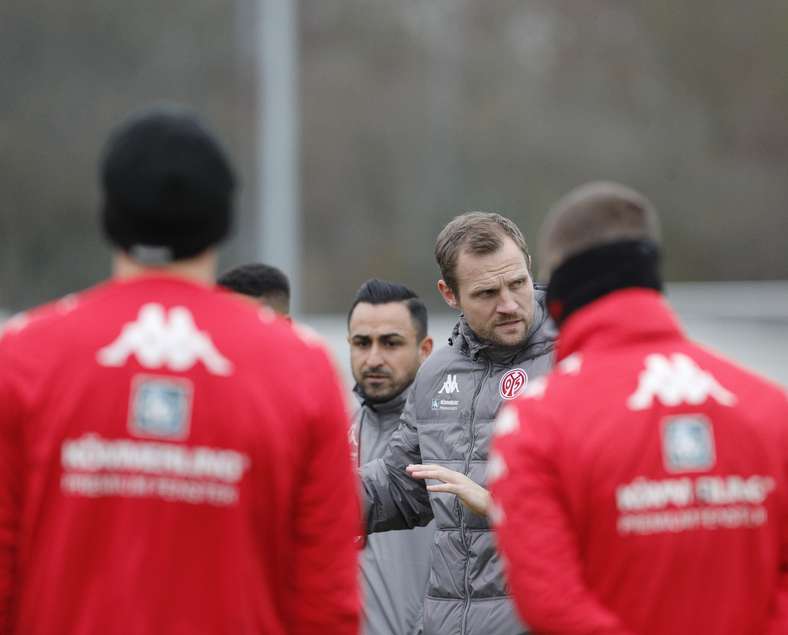 Svensson addresses the team at the training ground.

As the first half of the season draws to a close, the Zerofivers are still waiting for a much-needed sense of achievement at the bottom of the table. Despite the upcoming matches with top teams, those responsible do not consider the project of staying in the league to be hopeless. "For me, what's important is what I see on and off the pitch," says the head coach. "I've been here for nine or ten days now and I learn something new every day. I tell the players what they are doing well and where they can get better. It's an ongoing process," says Bo Svensson, referring to the fact that he only took up his post last week.

The two opening defeats at the beginning of the year at Bayern Munich and against Eintracht Frankfurt have by no means pulled the plug on Mainz, emphasised sporting director Martin Schmidt on Thursday lunchtime at the press conference before the next big task away at Borussia Dortmund on Saturday afternoon (3.30pm, live on 05ER.fm). Rather, said the Swiss, they are increasingly bringing the task to life together with Christian Heidel, board member for strategy, sport and communication, and Bo Svensson. The partnership is characterised by "euphoria, excitement, interest and commitment". The head coach, meanwhile, stressed that the team had shaken off the frustration of the defeat in the Rhein-Main duel during the week of training. "Our goal is to be as consistent as possible over 90 minutes and to do better than against Frankfurt," when his team only really got going after the break. Ultimately, a consistently convincing team performance will be a prerequisite to keep the chance of scoring against the Champions League team, who are peppered with top players, alive for as long as possible. "A lot of things have to come together against Dortmund, you have to have the right tactical plan and the right players on the pitch to be successful. Of course, you need a good day there," said the Danish former professional.

The 41-year-old also revealed what would be important in terms of preparation a good 48 hours before kick-off. "We had good moments off the ball against Frankfurt, made the spaces very tight at times, but the opponent still managed to break free time and again. We have to be more consistent in our tackling, because these situations can be the beginning of a possible goal threat if you can switch from winning the ball. After winning the ball, we also have to play more cleanly, which we have been working on intensively over the last few days. The players have to internalise the way we want to play. It's about going out on the pitch with the same idea and implementing it," Svensson explained.

How to stop Haaland?

There is no doubt that every Mainz player knows what to expect in Dortmund, especially with regard to Erling Haaland, who has scored just as many goals as games played (25) in the Bundesliga so far: "He is dynamic and a goal threat, we can only defend him as a team. You can't take him out on your own. You have to be compact and make sure that the next player is never far away, otherwise it will be difficult. It won't work with eleven individual players," said the Mainz coach, underlining the difficulty of the task. RB Leipzig recently had the painful experience of what happens when the Dortmund midfield, which is so strong in terms of individual players, is allowed too much space to play the Norwegian in a targeted manner. Haaland scored another brace in the 3-1 victory last weekend. And he provided moments that can serve as an object lesson in the mistakes that should be avoided at all costs in the game against the ball. However, the Mainz coach felt it was important to emphasise that they did not want to focus exclusively on the strengths of their opponents. This is a question of approach. "Do we just want to be cautious, cautious and cautious again? Or use the moment to show ourselves on this stage and compete with these players. It's also about our strengths, about focusing on what we can hurt them with. And we have the players to find solutions to pose problems for Dortmund."

Anything else would be a bit of wasted energy

In this respect, it is not helpful to dwell on the past, let alone on the many negative experiences of the season so far, but to focus on what can be influenced in the "here and now", Svensson knows. "People tend to look at the past and draw conclusions for the future. We can only influence the moment. For us, that means we will try to train on the right stuff today and work in the present. Anything else would be a bit of wasted energy." Which eleven the head coach trusts to have the energy to stand up to BVB over 90 minutes was something he left open on Thursday. Not least because the use of regular player Jeremiah St. Juste seems questionable at the moment after a thigh injury suffered in training. And all the more so as a busy week with matches against Wolfsburg and Leipzig in the OPEL ARENA awaits the Zerofivers. The coming hours and days will provide further information. One thing is certain, however, as sporting director Schmidt emphasises in conclusion: "Football is only about results, that's clear," said the former coach, emphasising that in the coming weeks only tangible results can keep the faith in the team's ability to stay in the league alive. In this respect, another surprise coup, like the 2-0 victory in June 2020, would give the Mainz side a boost in their fight to stay in the top flight. For that to happen, however, Svensson stressed that everything would have to go right and a lot would have to come together at the weekend.