A puzzling loss of form

Mainz suffer a clear drop in performance against Fortuna - Schröder: Learn from it, analyse it and work even harder 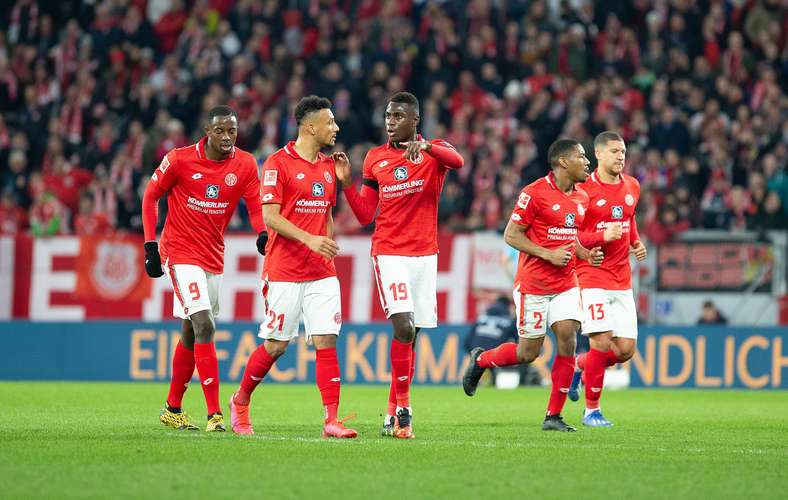 The Zerofivers have plenty to analyse after a late draw against Düsseldorf.

Up until the 85th minute, it looked as though 1. FSV Mainz 05 would be able to come out on top in what Rouven Schröder called a “peculiar game.” Then, a miscommunication in the closing minutes allowed Fortuna Düsseldorf to equalise and take home a point from the OPEL-ARENA. “Of course, you’re always hoping that everything will go your way and that you go home having won 1-0,” said the sporting director. “One could also say, however, that the 1-1 draw represents the most that we could have taken from a match in which we failed to take control of from the start.”

According to Achim Beierlorzer, the first half of the 2-1 loss to Augsburg in November was the worst performance he’s seen from his side since taking over as head coach of the Zerofivers. “Today ranks just behind that game,” he added. Just why the Zerofivers delivered such a poor performance in a match in which they had the chance to extend their lead over a direct competitor in the fight against relegation, is the question on everyone’s minds.

“Düsseldorf were the more aggressive side, and moved a lot better. We were pretty passive throughout, misplayed several passes, didn’t enter into challenges and failed to register a single shot during the first half,” Beierlorzer said, listing just a few of several mistakes. “We were unable to control the ball up front, barely managed to string together any passes and made individual mistakes. The passes that we played were uncontrolled.” This resulted in the visitors having four clear-cut chances right at the start of the match. Beierlorzer then switched from a back three to a 4-4-2, in order to bring in some defensive stability – a move which partially succeeded. Robin Zentner had to come up big with a quick reaction save against Markus Suttner shortly before the break in order to prevent him from netting the go-ahead goal. It would be Zentner’s last action of the day, as he picked up a knee injury and had to be subbed off at half time.

“The way in which we attacked was actually our biggest problem, because we were never able to relieve the pressure,” said Beierlorzer. Even after the break, the same problems remained: the team lost possession while trying to attack and were unable to form a counter-attack. And yet, somehow, Mainz were able to take a 1-0 lead. “It was the only time in which we managed to complete an attack,” said Beierlorzer. Phillipp Mwene played a pass to Robin Quaison, who laid it off to Jean-Philippe Mateta whose lob over the Fortuna goalkeeper found the lead of Levin Öztunali.

In the midst of a period of play in which the Zerofivers had managed to gain back some control against Fortuna, Mateta would go on to pick up his second yellow card of the day and was sent off. “That fits in with the story of the game and how we conceded to make it 1-1, because we scored that goal indirectly,” said Beierlorzer. Just as it appeared as though Mainz would be able to weather the storm and take home a win, Jeffrey Bruma kicked the ball out of Florian Müller’s hands, allowing Kenan Karaman to score the equaliser.

“It was just one of those days,” said the head coach. “It has nothing to do with the formation, or with our mentality. There’s nothing I can criticise about our preparations or our mentality, but there’s also nothing I can praise about the way we looked on the pitch. The team fought and played, but we didn’t play good football. There were a few opportunities, but only a few. That’s not the level we play at.”

This match showed “once again that we need to focus on ourselves,” added Schröder. “We don’t need to get in our heads that a win will bring us out of this situation. Things will be tight right until the end. We need to learn from this, ask ourselves what went wrong and work even hard to bring in even more effort.”

The draw means that Mainz were able to maintain their distance to their opponents. “We definitely need to do better in our upcoming games,” said Beierlorzer, who also let his team know what consequences he’s drawn from this match. “I told the team that I’m expecting a strong performance in training from everyone this week. After a game like that, it’s still everything to play for.”