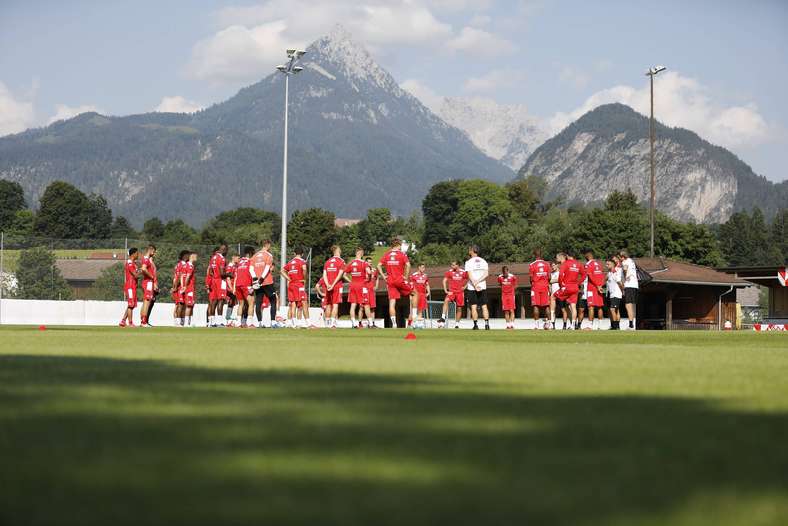 The 05 players before their first session at the Austrian summer training camp.

The players of Mainz 05 have completed the first of a total of eight days at the summer training camp in Bad Häring, Austria. In front of a picturesque mountain backdrop and accompanying supporters, the 29-man squad completed the first training session in good spirits early on Tuesday evening. Due to the previous weather situation, head coach Bo Svensson's team had to move to the sports grounds of FC Riederbau Schwoich at short notice. However, this did not affect the quality of the training.

After the Zerofivers had moved into their quarters and had lunch together, they went to the nearby training ground after a short breather.

Change of place at short notice

After a short warm-up phase, Svensson divided his players into two groups - the Zerofivers were allowed to prove their scoring skills in different goal-shooting scenarios and unpacked one or two Sunday shots in the process. The 05 head coach observed from the outside before letting everyone compete against each other in several forms of play. Meanwhile, newcomer Jae-sung Lee, who recently returned to the pitch after an injury lay-off, completed a separate individual training session.

Conditions are certainly not worse

Of course, the hustle and bustle was also observed by sporting director Christian Heidel, who followed the first session together with sporting director Martin Schmidt, then answered the journalists' questions and was extremely positive: "The first impression is very good," Heidel remarked in a relaxed conversational atmosphere and gave special praise to team manager Darius Salbert, who had found a replacement for the unplayable pitch near the team hotel within a very short time. "The river near the pitch turned into a brook, which then burst its banks," said Heidel, explaining the special circumstances, which the Zerofivers solved with aplomb: "The conditions are certainly not worse than on the pitch that was actually intended."

The fact that Mainz, in contrast to other Bundesliga clubs, went to the training camp at all has only advantages for the 05 sporting director. "Even though we don't have that many new players in the team, it naturally helps everyone to get to know each other even better. We've all only been together in this set-up for six months, and the coaching team can convey its principles even better than is possible in normal training sessions."

After the first session on Wednesday morning (10am), the head coach will also speak for the first time about his impressions from Tyrol and about the focus of the coming days. All statements by the Dane will follow later in the day on mainz05.de.