A LOT OF HARD WORK

André Schürrle turns 30 - Bungert: He was key for our success at that time 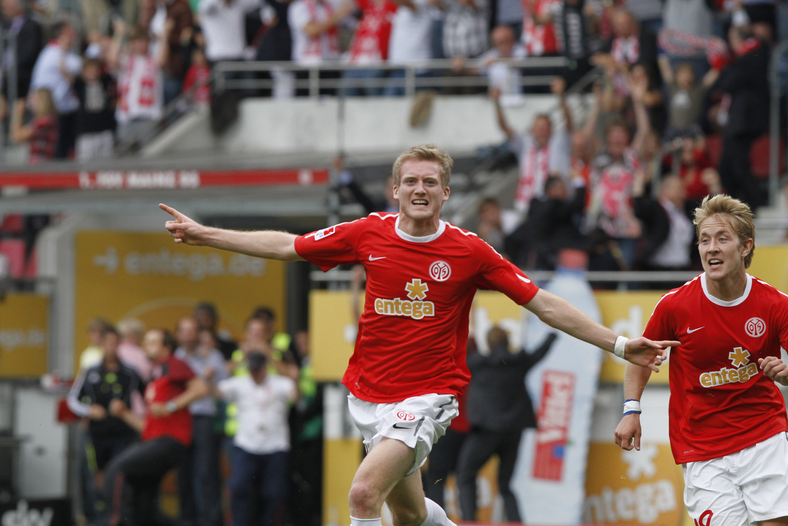 September 2010: André Schürrle scores the winning goal in a 2-1 derby win over FC Kaiserslautern at the Bruchweg.

His speciality was a fast solo run on the left wing then cutting into the penalty area and shooting into the far corner. André Schürrle scored many goals this way. The world champion, who retired this summer, scored 20 of them in his first two years as a player for Mainz 05. Today the Ludwigshafen-born player celebrates his 30th birthday.

On a Sunday at the end of June in 2009, the paths of two footballers crossed. Six years later, in the Maracana Stadium in Rio de Janeiro, they played a key role in one of the German national team's greatest triumphs: winning its fourth World Cup title and the first by a European team in South America. When André Schürrle dribbled down the left flank in extra-time in the final against Argentina and found Mario Götze in the penalty area who scored the winning goal, ARD reporter Tom Bartels commented on the goal with the legendary words: "Schürrle. The ball arrives! Do it! Do it! He does it!"

A brace in his sixth game

Schürrle and Götze faced each other on that June morning at Bruchweg in the final match of the German A-Junior Championship, in which the Zerofivers won 2-1 against Borussia Dortmund. One year later, Schürrle made his international debut after a full Bundesliga season as a top performer for FSV.

The blonde striker scored his first two goals in the Bundesliga on 19th September 2009: the equaliser and the winner in a 3-2 victory at VfL Bochum, in just his sixth game as a starter. "I had confidence in him that he would fit in so quickly and do well," said 05 coach at the time, Thomas Tuchel. A few days later, Schürrle signed his first professional contract and declared: "It's a great honour that the club has me firmly in their plans. He recorded five goals and three assists in his first season.

With 15 goals and five assists in his second season, he became Mainz's Bundesliga record holder, level with Shinji Okazaki. Schürrle never achieved a record as good as the one in his second season at Mainz. In 2011, the 05 player moved to Leverkusen for around eleven million euros plus substantial bonus payments when he subsequently moved to Chelsea. Never before had a German player amounted such sums of money when changing clubs. The talk is of up to 95 million euros. "Schürrle has everything it takes to play at the very highest level and to be at the top of the league," explained Tuchel in late summer 2010, when Mainz set the Bundesliga record by starting the season with seven consecutive victories.

Prime example of the Tuchel style

"André was a very willing player who was crucial to our success at the time," Niko Bungert, who played with Schürrle for two years, remembers today. "Back then we did the preparation with Jörn Andersen. When Thomas Tuchel arrived, he changed things dramatically with the aggressive pressing and the high starting position. Apart from the goals, André was the perfect example of this, because he had already experienced Thomas' youth training for a year. It was his great strength and a prime example of what the coach had in mind. He never felt too bad about it and it made him extremely important that he sprinted so much. Defensively, but also with his speed on the counterattack."

He was lucky to have had quite a few good coaches, said Schürrle after his surprising decision this summer to give up professional football before his 30th birthday. "But the best one for me was Thomas Tuchel, because he gave the most to my career. Our relationship has not always been easy, we have also clashed at times. But quite simply, he was the coach who had the most influence on me".

Tuchel never gave anything to Schürrle, Bungert emphasises. "He earned it all and he was very advanced in many areas early on. All in all, I think he achieved almost everything you want as a footballer in his career.

Mainz 05 wishes André the best for his 30th birthday and keeps its fingers crossed that all his dreams and wishes come true following his retirement!