A GOOD FEELING AFTER THE BREAK

After two weeks of training, Jan-Moritz Lichte and his team are optimistic about the game on Sunday away to SC Freiburg 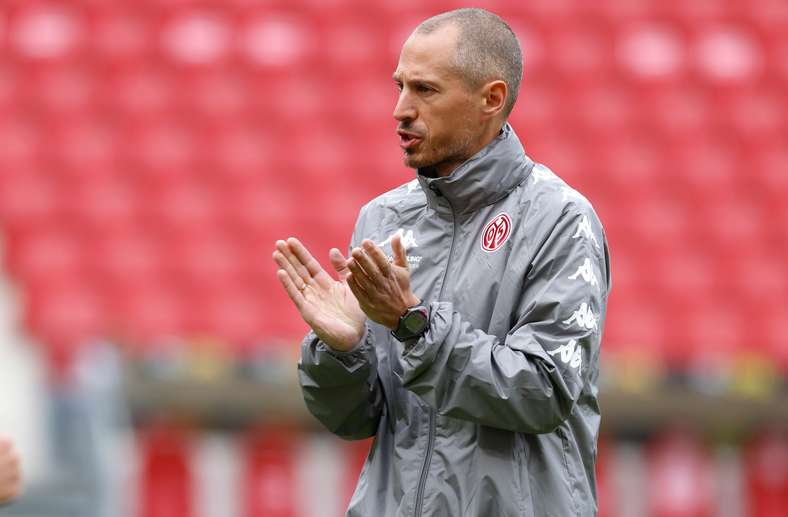 Head coach Jan-Moritz Lichte and his team used the international break for intensive work - both in terms of preparation and physically.

Jan-Moritz Lichte has "a good feeling" after the international break going into the away game at SC Freiburg on Sunday afternoon. At the pre-match press conference, the Mainz head coach talked about two good weeks of training at the Bruchweg. "We have worked intensively, both in terms of preparation and physically. Now we have to integrate the national players into the processes we have worked on".

Lichte and his team of coaches had deliberately refrained from playing a friendly match during this time in order to be able to work on key areas with no distraction. Mainz's matches in the past weeks provided enough evidence for this, both in negative and positive terms. "It was a mixture of the things that we have established in the previous games and our principles. That's why there are no new procedures, but we tried to work through technical stuff that had not worked out so well before," explained Lichte. "We have continued to practice the things that we want to work on because they should help our playing style".

The Zerofivers continue to focus entirely on technical work after earning the first point of the season against Schalke 04. Despite clear deficits at the back, Lichte had noticed a significant overall increase in his team on the pitch. He said that this should now be tackled with the aim of taking something away from Breisgau and continuing the upward trend in terms of points. "I will approach the game in Freiburg like any other. For me, this means full concentration on the daily work, on the idea we develop for the game and finally implementing that on the pitch," says the head coach of Rheinhessen.

Freiburg can be an unpleasant opponent for Mainz, but after a good start with four points from their first two games, they've only managed two more points from the following five games. "Freiburg thrives on intensity and very organised processes, both offensive and defensive," says Lichte describing Christian Streich's team. "We imagine winning the ball in certain areas and then want to counter quickly. We have to get speed into our game". At the same time, he also knows that you have to have patient phases against the Freiburgers, "because they have very organised processes, where it is not always easy to get pressure on them. Set-pieces are also a topic "that has made them strong offensively for years", said Lichte. "You can work on being close to the man, winning arial duels, and being physical. We must have full focus in every dead-ball situation.

The friendship between the goalkeepers of both clubs will also go to one side during the 90 minutes: Robin Zentner of Mainz and Florian Müller, who was loaned to Freiburg, still have regular contact with each other. "We always had the competition in mind, but always got along well. No matter who was playing, we pushed each other." Mainz head coach Lichte sees his regular goalkeeper as a "very important factor in our team". "Flo has been the same over the last few years. He's still a boy from Mainz, but now he's playing somewhere else and has to make sure that he does his job well."

A number of the  international players returned to training on Thursday at the Bruchweg. Ádám Szalai qualified with the Hungarian national team for the Euros next year, but had to return home injured and has since undergone successful surgery on his left knee. Also Phillipp Mwene, who suffered an injury in training, and the suspended Danny Latza will be out. On the other hand, Jonny Burkardt and Finn Dahmen, who played a major part in the successful European Championship qualification with the German U21 national team, returned home with a sense of achievement. "Everyone did a very good job. For Finn and Jonny, these are moments that naturally give them self-confidence," said Lichte. This momentum must now be taken to Freiburg so that more points can be added on Sunday.