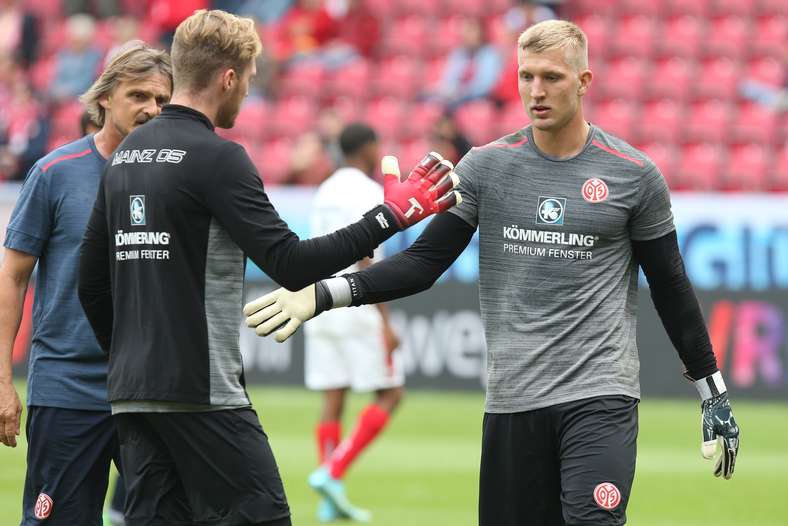 Robin Zentner (right), who won the battle to be first-choice 'keeper at Mainz before the season, is in regular contact with Flo Müller even after his loan.

If Mainz 05 wants to win their first league game of the season at Freiburg on Sunday, they will also meet up with Flo Müller again. The goalkeeper, who celebrated his 23rd birthday on Friday, has been loaned to the Breisgau team for the season and has so far played all seven Bundesliga matches. He is looking forward to meeting his Mainz colleagues: "Of course it is nice to see everyone again, not only the boys, but also the coaching team, the physios and everyone else around them. It's nice that we will have the opportunity to have a catchup".

Of course, the contact between Müller and the Mainz didn't end after his move to Freiburg. Robin Zentner, with whom he fought against for the Mainz starting position, and Müller talk on the phone regularly, for example. "In principle, that's part of everyday life," says Zentner looking back on the goalkeeper duel, "but I'm happy for Flo that it worked out and that he's getting playing time there."

However, all joy of seeing each other again will have to stop for 90 minutes on Sunday, because the Zerofivers are looking for the first victory of this Bundesliga season. "Although we have a miserable record, nothing is lost. It can turn with a win. It must come now. We have to develop the self-confidence that is needed to win matches in training, score points, gain further self-confidence and keep on scoring. That's what it's all about now," Zentner makes clear.

The 26-year-old goalkeeper is well aware that his team needs to start delivering from now on after a poor start, and should look to be climbing up the table. "Yes, then we'll just have to do that. We have no choice but to accept the situation as it is and show that we can do it. We didn't set ourselves our goals out of fantasy, we believe we can achieve them on the pitch. Each individual must prove this and so must we as a team.

So, full focus on the away win: "We are going there with the goal of taking the three points home with us. That must be the only focus. To block out everything that goes before and everything that comes after. Approach this game with full concentration and win."

Freiburg want their second victory of the season

Müller would naturally like to keep the points in Freiburg. After a successful start to the season with four points from two games, only two more were added before the international break. Freiburg is now in 13th place in the table. "That feels a bit strange after the way we've played," Müller says thoughtfully, but also points out that the team has already played Dortmund, Leipzig and Leverkusen. "You're allowed to lose against such opponents," says the goalkeeper, "but for me it still felt like there was more to it than that. In order to win against Mainz for the second time this season, Müller would like to see his team do the following: "We have to become more dangerous going forward, we haven't been able to create as many chances and defensively we simply have to stop making mistakes. We've always done well and allowed almost nothing. If you then concede a goal through an individual mistake, it's doubly disappointing."