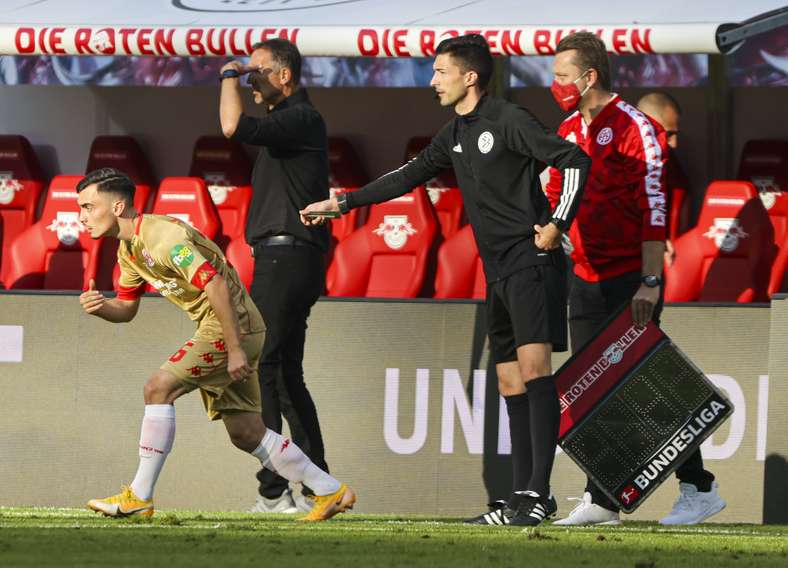 Paul Nebel became Mainz's youngest ever player when he came off the bench in Leipzig.

Following the 3-1 defeat in the opening game of the season at RB Leipzig, Rouven Schröder emphasised the positives of “giving young lads some game time” in the first Bundesliga match of 2020/21. Mainz’s director of sport was referencing Saturday’s two debutants, Niklas Tauer and Paul Nebel. Both were introduced to the action late on by Achim Beierlorzer, with Nebel becoming the youngest Bundesliga player in the history of 1. FSV Mainz 05, aged just 17 years and 346 days. “A very special moment,” said both debutants after the game.

13 years ago, Jürgen Klopp brought on Mario Vrancic in the current Liverpool manager’s last Bundesliga game in charge of Mainz – a 5-2 defeat away at Bayern Munich. The young midfielder made his debut aged 17 years and 361 days and completed his first and only game for the Zerofivers in Bavaria. However, this record was broken on Sunday when Paul Nebel made his first Bundesliga appearance aged just 17 years and 346 days. “I’m taking it as an early birthday present,” smiled the youngster, who will turn 18 on 10th October. Born in Bad Nauheimer, Nebel made the move from Kickers Offenbach to Bruchweg in 2016 and completed his second pre-season with the senior squad this summer, making such a good impression that it was only a matter a time before his debut.

In Leipzig, the up-and-coming talent replaced Jean-Philippe Mateta in the 87th minute. Speaking to 05ER.tv following the game, Nebel said: “the result was not what we were hoping for, but for me personally it was obviously a very special moment. I’m delighted!” He had not given much thought to what would happen when he got the signal from Achim Beierlorzer. "I jumped off the bench and was just happy that the coach was giving me the opportunity to come on for the last few minutes. It was such a cool feeling. A few years ago I was playing with these players on the PlayStation, and now I’m playing alongside and against them. That makes me very proud. I'm very grateful to Mainz for letting me represent the club and also for how much they’ve helped me improve throughout my time here so far," Nebel stressed.

“Mainz has become my second home, which makes it even more special. I’m really pleased for Niklas as well. We’ve known each other for a few years already through the academy, and he’s worked so hard to get to this point. It’s so nice that we’ve been able to experience this moment together, and hopefully we’ll have many more in the future.”

19-year-old Niklas Tauer is the second born-and-bred Mainzer in the Zerofivers’ midfield, alongside teammate Ridle Baku. Should Merveille Papela also make a Bundesliga appearance this season, he would become the third member of the group. Papela also completed pre-season with the senior squad and will be part of the Mainz set-up for the coming season. This is a point of pride for Mainz’s youth academy at Bruchweg, and proves that the home-grown philosophy of the club is working. In the current ranking of players from the local area (players aged 15 to 21 who have been registered with their current club for three complete seasons), Mainz 05 occupies the top spot, with ten players.

“On Saturday at home to Stuttgart, we’ll get all three points.”

“I’m really pleased to have been given a chance. I had to wait on the sideline for quite a while because the ball just wasn’t going out! So I had a lot of thoughts running through my head at that point,” said Tauer, as he described coming off the bench to make his debut. He was just hoping that he would get a few touches of the ball in the last minutes of the game. Coming on for captain Danny Latza, Tauer achieved this goal. “I need to make sure that I don’t get dragged out of position in the middle of the pitch, so we keep the midfield compact. That’s what I was trying to do,” said the defensive midfielder, who came from Weisenau in 2012 and is now a part of the senior squad.

“It’s a very special feeling to be a part of a Bundesliga squad and I’m very grateful to be here. It’s something I’ve been working towards for a long time and I feel like I’ve been rewarded for all my hard work,” said the debutant. His focus is now on next weekend’s game: “On Saturday at home to Stuttgart, we’ll get all three points.” Of that, the 19-year-old is certain.