A COLD START TO A "CHILDHOOD DREAM"

After only one training session, Robert "Bobby" Glatzel celebrated his Bundesliga debut against Union & is excited about many more appearances in the 05 jersey 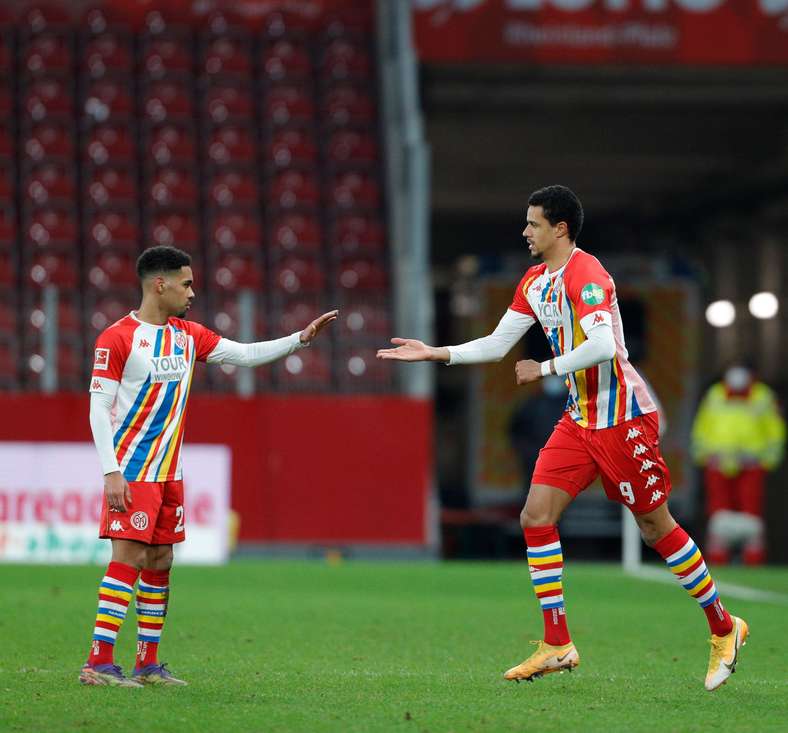 The first Bundesliga victory over Union Berlin at the weekend was by no means a dream come true for Mainz. The Rheinhessen team scored three very important points with the 1-0 victory, no more, no less. For Robert Glatzel, however, the final phase meant more. The newcomer speaks of a "childhood dream" that has come true - despite the cold start. Now the attacker wants to contribute to making the dream of staying in the league come true for the Zerofivers in the coming months.

He spent his first days as a Bundesliga player in the solitude of his hotel room. Only a session in the weight room was granted to him due to the quarantine imposed by the health authorities, reports Glatzel, who had moved to the Rhine from Cardiff shortly before the winter transfer window closed. It was hard, and sometimes "boring", when Netflix & Co. were worn out - no question about that. But special times require special measures. And so the 27-year-old made his debut in the German Oberhaus just over 24 hours after his first team training session on Friday afternoon in a contested final phase against Union Berlin. A sign of confidence and full conviction also on the part of the head coach, who had been enthusiastic about the signing even before the first personal meeting. "We spoke on the phone for a long time. He's up for it and totally excited. It is very important to me that we get players who come here with an absolute desire for the task," Bo Svensson said about the third new signing in the run-up to the Berlin game.

Debut with a small flaw

Statements that coincide with what Glatzel had to report on Tuesday morning, when he became noticeably enthusiastic during his first media round as a Mainz player. He was surprised by Mainz's interest, yes. But he "didn't hesitate for a second" when his advisor told him about the offer. "It was very short notice, but I think I deserve the chance to play in the Bundesliga. I dreamt of it as a child - I almost gave up everything for it - and I'm just happy to have the chance to be here," said the Munich native, who is of course aware of the difficulty of the task in the relegation battle. Which is why he doesn't want to dwell on what will happen after the season when the loan deal with his Welsh employers ends, at least for now. "Almost anything is possible in football, but it's about avoiding relegation." One thing at a time, then.

The first small step has been taken after two shots on goal, ten ball touches, almost two kilometres of running and the first three points as a newcomer to Mainz: The first Bundesliga minutes worked out straight away for the man who once scored 21 goals in 74 second division appearances for Kaiserslautern and Heidenheim. And he would have been only too happy to crown his eagerly awaited debut with a goal, because the chances had been there during an open exchange of blows in the final phase. "Of course I was a bit annoyed, as a striker you always want to score," the attacker is aware of the mission he has to pursue in the remaining 14 games. The cold start to his Bundesliga career was no problem, however, despite the unusual first few days on the job, Glatzel emphasises: "There's a super atmosphere here, right down to the physios, the whole support staff." And so the new man was ready when head coach Svensson trusted him in the final phase to provide the necessary relief and help defend the narrow lead - and he succeeded.

It was much more blatant than I expected

"When dreams come true", he would announce on his Instagram channel a little later. Not an empty phrase, but the result of hard work, which he now sees rewarded at his prime footballing age and wants to continue with Mainz. "Bobby", his nickname inspired by Bob Marley, whose music and character traits his father once adored and named his son after the musician, wants to bring to the table not only his goal-scoring ability and passion for the task at hand at Bruchweg, but also his toughness, which he last experienced at Cardiff in the Championship. "The English toughness, that really surprised me. It was much more blatant than I expected," says the striker. He has "definitely taken this form of tackling with him".

A dream as a common denominator

On Tuesday morning, he now started the first week of training together with his colleagues and the preparation for the match at Bayer 04 Leverkusen on Saturday afternoon. Getting to know each other, soaking up the coach's demands and principles and offering himself for as many more minutes of action as possible. A tight programme, Glatzel also knows, and presents himself as a motivated team player. "It's like everywhere else, you have to prove yourself. I will try to offer myself to the coach through good performances and to be on the pitch every possible minute. I want to help the team so that Mainz 05 don't get relegated." With commitment and goals, Glatzel wants to play his part in keeping this former (Bundesliga) dream of all Mainzers alive in the coming season. A dream as a common denominator. And who knows whether the Bavarian-born player might end up making the Rhine his home in the long term?