A coaching prodigy with a novel plan

As the youngest head coach in the Bundesliga, Thomas Tuchel formed a team, which brought attractive possession football to Bruchweg. 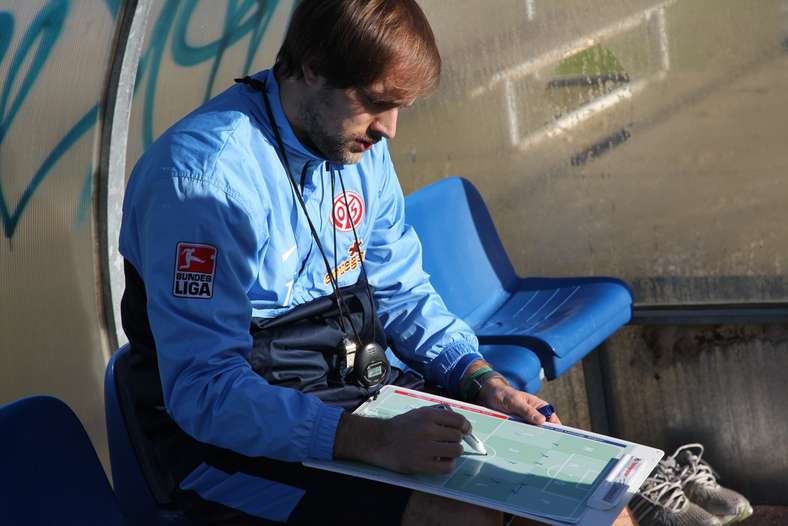 Mainz are staying at home. So we have a bit of time to take you through some of the most important events in our club’s history. Today, we’re looking at the 2009/10 season and the beginning of a new era at the club. Just five days before the start of the season, the Zerofivers parted ways with head coach Jörn Andersen. In his place, Thomas Tuchel to the reins at the club, bringing flowing, high-tempo football to Bruchweg.

Mainz 05 have always had a penchant for unconventional decisions and solutions. Former chief executive Christian Heidel was no different. In a press conference, Heidel made an announcement that was much-discussed throughout Germany at the time. Just four days before FSV were due to take on Bayer Leverkusen on matchday one of the 2009/10 season, he declared that the coach of the U19s would take over the first following the departure of Andersen, who had led Mainz back to the Bundesliga. Doubts about the Dane’s managerial style had been rife throughout preseason. After defeat in the DFB-Pokal at the hands of VfB Lübeck, Heidel made his move. Thomas Tuchel, who, just weeks before, had led the U19s to the title against Dortmund, was given the top job.

Heidel explained that the club had noticed Andersen’s diversion from the previously agreed-upon plan for the direction of the first team. “We have clear requirements of how a head coach should deal with the players and the club. Our strengths are teamwork, closeness to the team and internal communication,” he told the Mainzer Rhein-Zeitung. He went on to state that this approach had begun to differ from that of Andersen. Tuchel, a student of Ralf Rangnick, would suit the club very well. “It’s another little piece of Mainz 05. He has the know-how and fits our philosophy. We have no doubt that he’s the right person to communicate with the team.

Tuchel himself likened the Zerofivers to “a small gallic village”. “A small club, with not much money, an unknown head coach, enthusiasm and the ability to make life difficult for the rest of the league.” At 35 years of age, he was the youngest coach in the Bundesliga. In the first third of the season, when Tuchel’s tactical ideas were not yet fully formed, the young coach relied on emotion and passion, particularly at home. There was a willingness to run and fight, passion and the player’s desire to push themselves to the very limit of their physical capabilities. “We need to get possession of the football”, explained the young prodigy after an opening-day draw against Leverkusen. It would take time for this desire to play possession-based football to come to fruition. It was a fairly novel concept at the club. After a few weeks in charge, it was clear what Tuchel wanted: he “had the courage to play possession football with a team that had just been promoted. Patient build-up, enabled by constant movement of the forwards, weighting of pass and pass accuracy. The runs were almost automated. All on the basis of an impressively organised defence,” it read in the Mainzer Rhein-Zeitung.

FSV managed 24 points in the Hinrunde, and the fans were estatic. Bruchweg was sold out every week and became a fortress, which opponents learned to respect. The high point was absolutely the 2-1 win over Bayern Munich, led by new head coach Louis van Gaal. Mainz actually scored all three goals that day. New signing Andreas Ivanschitz opened the scoring and centre forward Aristide Bancé doubled Mainz’ lead, before Nikolce Noveski deflected Thomas Müller’s shot into his own net. Bayern were stunned. It was a football fiesta for Mainz though, who pressed Bayern hard and with aggression. Bo Svensson, who became a regular in Tuchel’s back four, had Germany international Miroslav Klose on a string all game long. It was also the first real taste of the ability of a young André Schürrle.

During the season, Tuchel established what would become a trademark of Mainz 05, which would used by later head coaches: the match plan. Tuchel “has proved that a recently promoted team is actually able to chop and change personnel an formation week by week,” the Mainzer Rhein-Zeitung stated. Tuchel focused training sessions on the upcoming opposition and worked on specific match plans for specific teams. If the plan wasn’t working, he’d often formulate a new plan throughout the first half, before playing an entirely different system after the break.

Mainz played with a flat 4-4-2, a midfield diamond, a 4-2-3-1, a 4-1-4-1, a 4-4-1-1, and 3-5-2 and everything else in between. “No other Bundesliga head coach displays this amount of flexibility nd bravery,” the Rhein-Zeitung stated. “And you don’t t get the impression that this process of development will finish in ninth. Quite the contrary.” From his squad, Tuchel formed a team, which was moulded by his own footballing style and tactics. This would lead the club to a Europa League finish the following season.