90 MINUTES WITH A CLEAR MIND 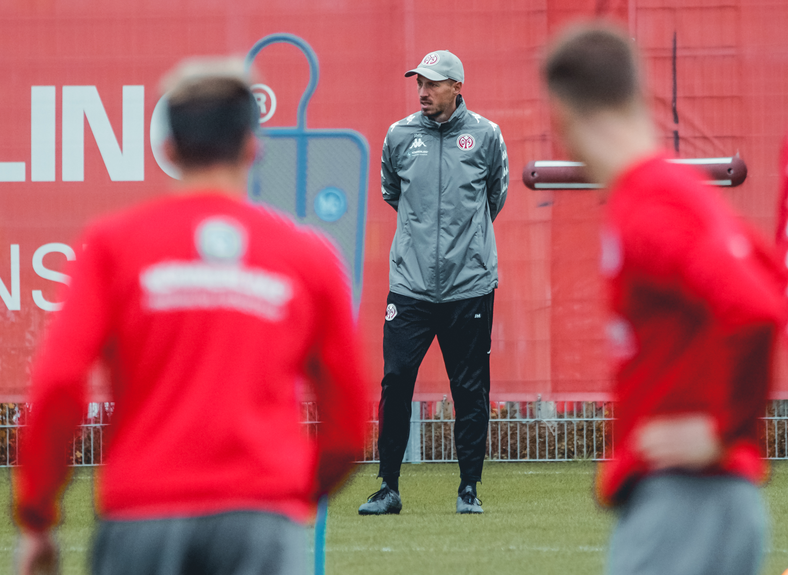 Focus Augsburg: Head coach and his professionals deal exclusively with this challenge in preparation for the next game.

In the home games against Bayer Leverkusen and Mönchengladbach, Mainz’s improvement was clear to see, even if the points once again went to the opponents. On the sixth matchday of the Bundesliga, Jan-Moritz Lichte's team now has to go to FC Augsburg (Saturday 15.30) and try to earn the first points of the season.

Heiko Herrlich, the coach of FCA, has warned it would be a mistake to believe that the match against Mainz will be easy just because they are at the bottom of the table. His team has recently lost to Leipzig and Leverkusen, but already has seven points, including a 2-0 win over Borussia Dortmund, and will definitely be a test for the Mainz team, who will need to put in a top performance.

Augsburg run further than anyone

"Augsburg are a very physical and defensively disciplined team that switch from defence to attack very quickly," said Mainz coach Lichte at the press conference two days before kick-off. "They have run the furthest distance of all the teams and are way ahead in sprints. That shows that it will be a physical confrontation. We have to bring to the pitch what we have shown in our previous two matches. It won't work with less".

However, Lichte is confident that his team will be able to bring home a victory at the sixth attempt. "The goal is to clear the mind for this game. No matter where you are in the table, you can’t think about that for the 90 minutes. It's all about the game, not about anything else. It's just about achieving what we want to achieve. That's why we focussed on these 90 minutes during the week in training and didn't deal with any other scenarios," the 40-year-old described the approach.

"At the moment I have the feeling that we all believe in what we are doing on the pitch. I evaluate the situation day by day. And it's like I said before this week: everyone is digging in. We have high quality training sessions. That's how you can tell that the players don't give up and know that we have to keep working like this so that we can reward ourselves as soon as possible.

An assessment that is shared by the board in Mainz. Rouven Schröder is present at almost every training session, observing everything very closely and constantly talking with the head coach about the situation. "The team is hugely motivated from the first to the last player. Everyone is looking for their chance. The coach encourages competition at a high level. Everyone pulls along and takes in what is discussed via video and during the sessions. We want to see this intensity," explained Schröder.

He therefore does not feel that he has to give the players any guidelines in addition to Lichte. "You can sense whether a team needs an extra message or a separate talk. Our team definitely does not need it. The players have understood the issues and are prepared to approach them by being self-critical and then to implement them," Schröder explained. "But one thing is also clear, we want to see the rewards, we want something tangible. The next opportunity is against Augsburg. We want to tackle this with all our might.

Then you are more difficult to read

The team goes into the game against Augsburg well prepared. Lichte has spent parts of this week's training to specifically work on defending Augsburg’s dangerous set-pieces. Actions after dead balls and defending the counter-attack have been on the training schedule. The same goes for our own attacking play after the ball is won or from our own dead balls. "My goal is to get more players in the correct position to become dangerous on goal", said Lichte. "So not everything is focussed on Jean-Philippe Mateta getting the ball. Players like Quaison, Burkardt, Öztunali, Boëtius and others must make the deep runs and score goals. Then you are more difficult to read, because the opponent cannot concentrate on just one player.”